since this year seems like companies are jumping ship left and right to join in on the fad after Love Live’s success, why not do a compilation on some of them?

That tells the tale of the most recent class of recruits for ‘idols in-training’ at an academy built by a famous agency solely for the purpose.

Your job? Be the teacher/producer that will help them grow into form while also dealing with the seniors meddling with the newcomers

Gameplay:  Interface sharing the most resemblance with llsif , the game quickly surpasses the equivalent by introducing daily missions that grant stuff ranging from healing items to restore lp to earning disks for the gatcha or exp/coin cards.

Party deck building is taken a level further too, for each character has 2 skills – personal (that is going to be mostly either healing or score boosts) and band ones that are activated by having all the other members present in that deck (that tend to have a lot more variety, since along with score boosting it can also be an increase in the bonding points or a percentage for missed presses being treated as a perfect instead etc) 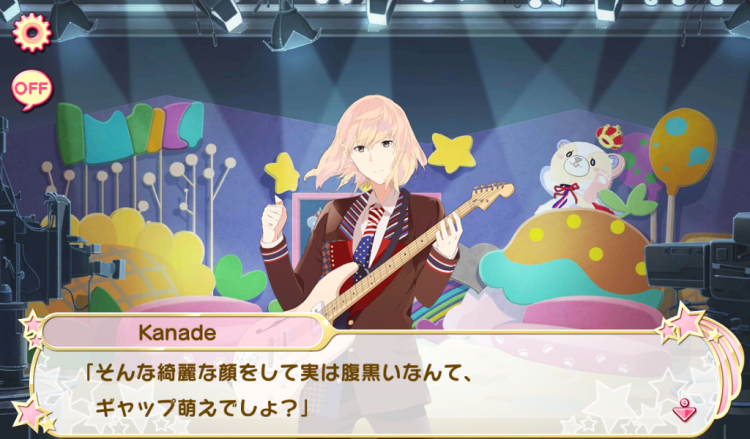 Characters:  While the fact that each group has a different artist might feel weird, as of now I’ve yet to really dislike any of them. Rather, the producer likely ranks at the top for being really great at dealing with a lot of the guys in a ‘deadpan pro’ way so seeing more of her becomes pretty much like one of the goals when looking to unlock more of the stories

Conclusion: Pro points – 1)possibly being among the most easily to get into of the bunch, since both the music and characters are nice and certain skills make clearing higher difficulty songs feasible even if the player isn’t that used to the higher speeds. LP recovery rate is pretty fast too

2(?) Passes the ‘is Maeno in this’ test by being one of the first seniors introduced

Con points – along with having a bit of a device heat up issue even at lower visual settings, to get all of the voice data can be an issue since a lot of them are treated like extra data to download when it’s outside the main story (if thankfully as a skippable option so it’s not this complete roadblock when catching up to the unlocked bonded skits)

Is the more general story of the low-rank idol agency putting in charge the presidents daughter, Takanashi Tsumugi, to be in charge managing their newest possible talent – a group of 7 youngsters with different specialties. aka Idolish7, as they face a variety of difficulties on their way to a debut.

Gameplay:  Standing out by having a fully voiced story mode, the actual song gameplay is….fairly poorly designed. As while you can’t ever really ‘lose’ by a song due to there being no health meter, stuff like the visual effects or the background mv (that can thankfully be disabled) are fairly distracting. The presense of flick and slide notes aren’t helpful either

Characters: While not dislikeable, the main group suffers from not feeling that special due to how ‘dramatic’ the main plot tends to be. A matter which combined with the rival-band, TRIGGER, having a lot more appealing conflict going on behind the scenes can make the game hard to get into

Conclusion: Pro point – 1)the most friendliest to genre newcomers, since having no loss condition + an option to adjust song speed makes clearing the challenges be just a matter of memorizing the pattern

4(?) Arina Tanemura being the main artist can be a part of the appeal

Con points – 1) as noted above, the rhythm part design can be difficult to like

2) Card inventory is limited to 50, which can quickly run out as the player keeps copies for further idolization. Buying more naturally demands money currency while giving not that much extra slots

3) the money gacha’s only extra feature is only adding an extra card if you do 10xpull, so hope you weren’t expecting great results \o/

On the list of pending an extension after release:

Sega joins the bandwagon, as the characters this time are a musical troupe that picks up the MC after seeing her scenarist skills?

Sony couldn’t resist the boom either, so why not do a title for a more mixed audience about music being lost for like 15 years till a group of rebel youngsters decide to fix that(?).

When a shoujo manga not only earns a tv series, but looks to do app shenanigans too…?