Plot: Sonogi Akihiro is a politician from Kyouto in the midst of his 3rd year of keeping his seat as part of the House of the Representives. Our story begins as the Sanjou Cabinet celebrates victory of succeeding in making up the bigger half of the House of Counsilors and Sanjou gets to continue being the Prime Minister partly thanks to Sonogi’s aid of gathering votes with the help of his looks and youth (since the faction he’s in, The Democratic Liberal Party, is part of it).

Now during the later half of April as Golden Week is approaching, the main topic is switching into the nearby IAF (International Athlete Festivala aka The Not-Olympics tm) and the precautions&laws introduced that will take place during it. Sonogi’s exasparation at the publics responses to some of them and the repeated mussings on how blindly people believe in Japan being absolutely safe tm proves to be too strong of a jinx so one day there’s an explotion at Shibuya Scrable that quickly proves to be an intentional act of terrorism.

Now in a hurry to solve the case so the IAF can still take place, Sanjou establishes a comittee in charge of preventing further such acts while Akihiro resolves to volunteer to be part of it even if it means embracing the risk of being used as a convenient scapegoat in case of failure…” 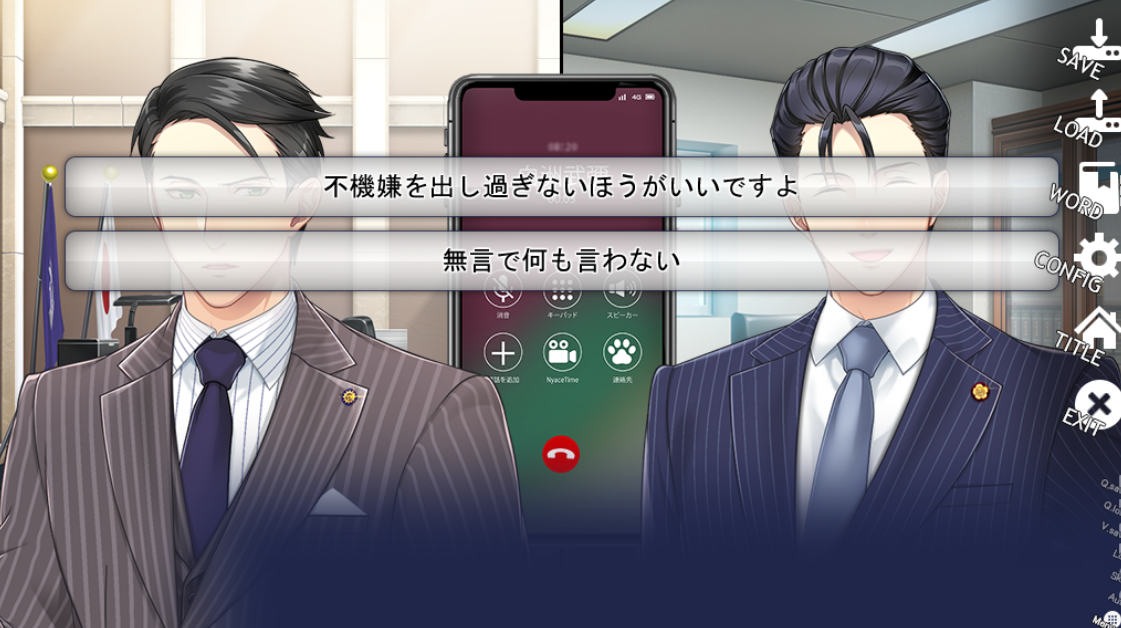 Gameplay: Good ol’ choices as a lot of bad ends are pretty immediate (as it felt silly to see TO’s system on sometimes lacking an alternative option if the bad end was more based on an earlier choice being wrong)

As with stuff from this company, there’s a voice-gallery to save lines one really liked…and a keyword glossary to explain certain terms due to how this is a very plot-focused game so visiting the hp to hear countdown voices that are even more setting lessons before starting this might be a good idea to do (if I sure didn’t so seeing them afterwards was more of a reaffirmation on understanding certain terms right)

Sonogi Akihiro – I read once a person describing how experiencing this game is like the player getting continuously charmed by Aki and they sure. weren’t. kidding

For initially seeming like token good-natured kid with good intentions, he sure proves to be ultimately a sinnamon roll so routes just define how blatantly you see him show this quirk vs the ‘cute’ dork side. Add to that a pretty brilliant fashion sense (that certain people would vote as more disastrous for a 29-year old) and it was very hard to not like the guy the moment the cat-shirt debate started. Then there’s the whole Aki ‘Kent’ shtick on having his disguise when looking to go into public without people recognizing him…just be unstyling his hair that somehow still proves to be very effective and just. Bless this goof 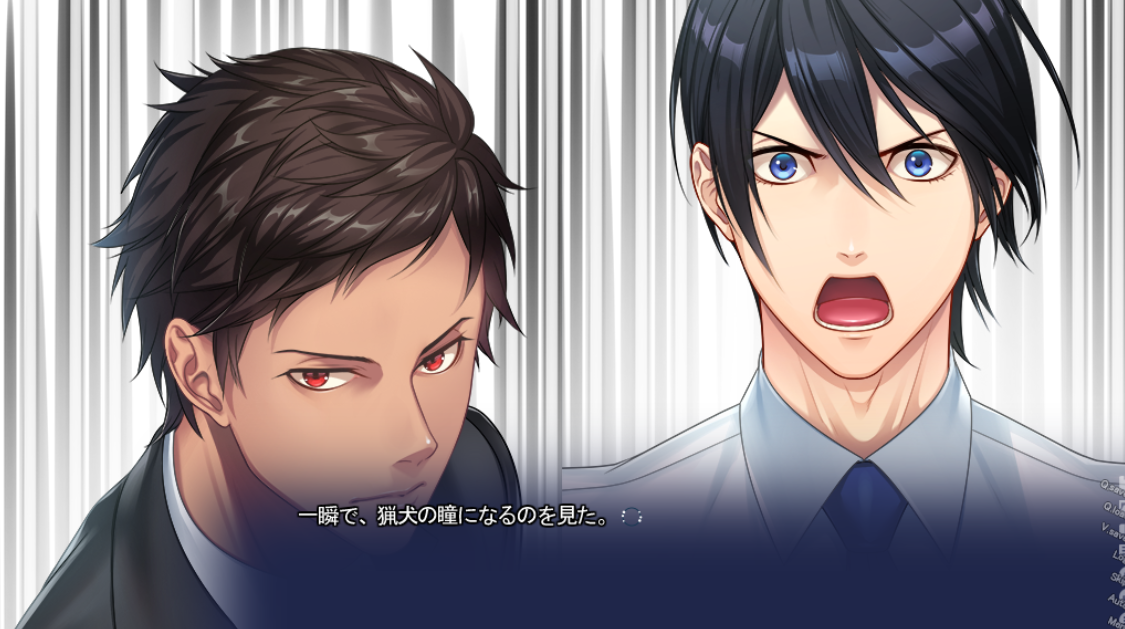 Agatsuma Taiga – Youngest of the main cast, Taiga’s personality is pretty much that of a loyal dog that ends up recognizing Aki as his ‘master’ when hearing the other call out to him in a commanding tone after being assigned as the others SP.

Sadly his presence is dictated by only being there if Aki gets as far as being promoted to a Minister in charge of the comittee during the interview when he volunteers to join it. Which is only…2/5 routes, but when there Taiga’s endearing as the one quiet, calm&collected person in a very ‘loud’ cast. Route itself proved to be a pretty good introduction to the game itself since it’s what I landed on during my blind run and the gimmick on having two different plotlines and relationship dynamics because of that was…interesting? If kinda awkward on the deja vu side to see the  master&dog stuff pop up again after the previous title I played

Tougo Asuma – Aka the 2nd master of wrong initial impressions. Asuma’s the youngest son of a large company who’s father has been one of Aki’s financial supporters since a very early stage in his political career. Initially you see him as acting pretty hostile & rude that only gets all the worse when it turns out Asuma &his dad had been at the frontseat of the explosion on the same day Aki had told to the others face it’d be a low chance for anything like that to happen. So silent hostility transforms into openly lashing out at the other in anger.

So you’d figure dealing with the emotional trainwreck based on that would be his route.

The moment you actually Asuma’s route it turns out the kids actually the nicest person in the cast who’d qualify as a cinnamon roll that can’t be angry at people without feeling bad about it 5 min later. And his actual interactions with Aki is him pretty quickly turning into a giant baby that keeps spilling his emotions everywhere.

Most often while crying.

And unlike Taiga, Asuma’s alternate ‘plotline’ is just badend central to further emphasize how you must protect this dork and his smile.

Shirasu Takemi – The Tokyo Governor who got elected the previous year while basing his campaign mostly on critisizing how the goverment dealt with a still unsolved suicide case. Possible case 3 of wrong initial impressions given by the prologue since Shirasu is presented as an antagonist (and red herring?) but then turned out to be the 2nd nicest person after Asuma? Sorta? Since Shirasu is this combination of a social truck that intentionally agitates others with his ”my way or the highway” attitude…and a Mr justice that never grew out of the habbit of running to help others when seeing a need to the point of reading every email personally that’s sent to the Metropolitan.

Shirasu’s the route I found the most fun personally since it’s where Akihiro shows off his sinnamon side the most and you get to experience 2 types of human circuses thanks to how the two would initially be labeled as ‘rivals’ by the media. Bonus points on the actual relationship dynamic being mutual sassers that’d jokinglly flirt with the other so…I was kinda doomed to love this just from how much I already enjoyed Meguro in TO.

Tademaru Kazuki – The not too subtle fish of the bunch. Tademaru is Aki’s secretary/childhood friend who after a long time of being abroad one day popped up to suggest a reunion where he proceeded to convince Aki about going into politics even though in the past their conversations re:subject had the roles reversed with Aki being the supporter/secretary. It kinda says things about his personality when Taiga canonly labels him 狂犬 when seeing one of his private moments with Aki.

For better or worse, Tademaru’s route is also the true plot exposition one too so while he’s not a bad character….it kinda figures he’d ultimately get overshadowed by everyone else having a part in it so the presentation feels more memorable.

Conclusion: As my 1st experience with this author their previous work really rised upwards on the list of titles I want to play now since calling Tokyo 24th ward good is kinda…an understatement? More so if you’re looking for a plot-heavy game where you don’t really mind that the romance is more akin to crumbs spread out here and there. The story tackles some pretty serious modern issues while being pretty blunt on it’s callouts so the only drawback I can think of is how some of the terminology can get difficult to understand. Otherwise? This heads more towards a ”please read this” towards people fine with the genre instead of the usual ”is it worth it or not?” question since it’s been a while since a cast&setting stuck with me so much.

The official-ish recommended route order is Asuma=>Taiga=>Shirasu, but speaking from experiencing Taiga=>Asuma=>Shirasu worked out very well too so the only thing to actually remember is to leave Shirasu as the last route before the final one.

No route summaries this time as the game kinda took over my moments section enough during march with each character getting one collection for previewing stuff and it’s another title I’d rather not completely spoil.